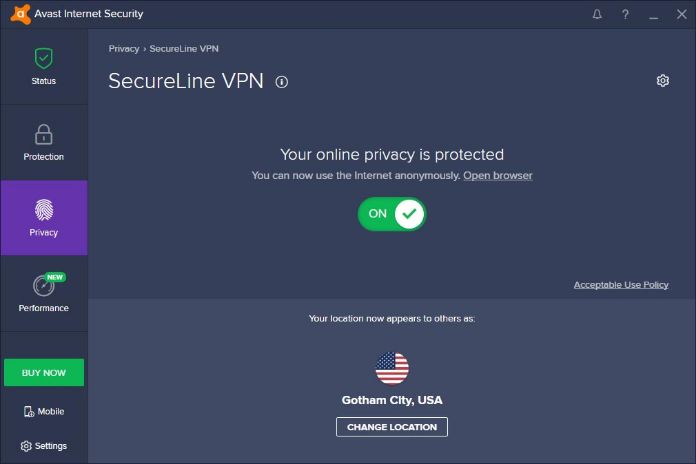 A new product from Avast aims to kill two major birds with one stone: The company’s SecureLine VPN is first of all designed to keep users’ data safe from prying eyes when they connect to potentially risky Wi-Fi hotspots. Second, the product enables people from outside the United States, or U.S. citizens traveling abroad, to access a raft of websites and online services that would otherwise block them.

Avast’s SecureLine, which comes in two flavors – one for iPhones and other iOS devices, and one for Android – is bad news for hackers. Unprotected, unencrypted networks are easy meat for them, but a secure VPN is a different matter entirely. Once a user’s data is encrypted, it travels down a secure tunnel, which shields and cloaks it from being seen by criminals and snoopers alike. Furthermore, the product allows users to browse the internet anonymously.

Avast decided to develop its new VPN offering after conducting research into the internet browsing habits of over 300,000 persons in the United States. From this, the company learned that about fifty percent of smart phone users hook their devices up to open Wi-Fi at least once per month. Of that grouping, about four out of ten do so even more frequently – weekly, or even daily. That means thousands of people are connecting to these potentially dangerous networks, but think nothing of using such untrusted connections to visit online banking sites, or shop for goods and services.

While you may be fortunate, and have so far dodged getting your password hacked or your credit card details stolen, there is no point trusting to luck. That’s why it is wise to consider a VPN product such as Avast’s new SecureLine.

As already mentioned, an additional benefit of Avast SecureLine is that it can be used to cloak your IP address and make it appear that you are accessing the internet from a geographical location other than where you actually are. One advantage of this is it allows people located outside the U.S. to use American shopping sites and other services, which would otherwise detect their location and block them. The way to dodge this kind of restriction is to set the location server in Avast SecureLine manually, for example to a server located in the U.S.

The protection and utility offered by Avast SecureLine is surprisingly inexpensive – monthly subscriptions cost $2.59, while a whole year’s sub will set you back only $19.99. Subscriptions can be purchased from Google Play (Android version) or from Apple’s App Store (iOS version).