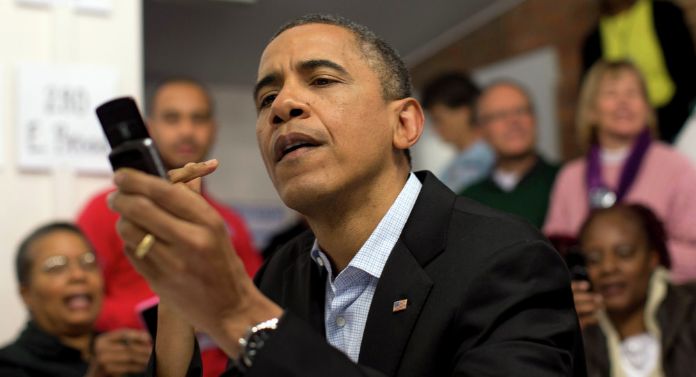 In a shock statement last Friday, the NSA asserted that there is nothing illegal about the way it tracks cell phones in places outside the United States, justifying the practice as being allowed under the terms of a controversial presidential order. Consequently, the unusual snooping program gets its regulation in a rather unorthodox manner – via a select band of American lawmakers, along with a handful of President Obama’s staff, but not from any court.

From a series of documents leaked by the renegade NSA operative Edward Snowden, the world has learned how up to five billion cell phone records per day are grabbed by the American spy agency, which trawls them for location data of the devices in question.

Wherever they may wander, cell phone owners worldwide can bet the NSA is extracting data from the raft of cables that carries cellular phone traffic all over the globe. According to the Washington Post, the NSA’s data scoop includes American cell phone data, too.

In a bid to dampen down the fire of international outrage, the NSA denied on Friday that it tracks each and every phone call in the world. Furthermore, the security agency said that there’s a limit on the quantity of U.S. data it snags. However, no estimate has been provided thus far by the NSA as to the precise number of U.S. citizens whose cellular phones get tracked on account of them traveling outside America.

In a recent statement, Vanee Vines, a spokeswoman for the NSA, stated that cell phone tracking was “not ubiquitous.” Furthermore, Vines swore blind that the NSA “does not know and cannot track the location of every cell phone.”

According to Vines, the NSA’s practice of collecting location data produced by global cellular phones is allowed under the terms of Executive Order No. 12333. This governs every aspect of American espionage and is overseen by various inspectors general and congressional committees, but not by any court.

President Obama and various senior intelligence officials have on occasion justified NSA programs using the argument that all of the three American government branches oversee the programs.

Cathy Crump, a staff attorney at the American Civil Liberties Union, deplored the NSA’s snooping programs, which operated “without any supervision by a court.”

On the other hand, Vanee Vines of the NSA maintains that there are still legal restraints on the tracking of cellular phones. Where data gets collected unintentionally, there is a legal requirement to filter it and keep it away from prying eyes, as well as limiting the time such data is held on record, according to Vines. “FISA authorization would be required for the intentional collection of domestic metadata,” insisted Vines.